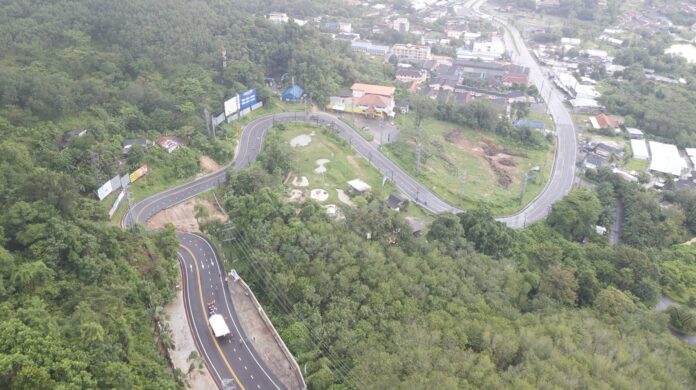 They are in no particular order of importance but roughly in order of publishing. These are from Monday, October 17th, 2022, to Sunday, October 23rd, 2022.

Phuket locals including Mr. Rewat Areerob, the President of the Phuket Provincial Administration Organisation (PPAO), who said he is well over fifty but declined to give his exact age, told the Phuket Express since they were born this recent flood in the Phuket Old Town area was the worst flooding in 50 years.”

2. A road leading to the Patong Hill in Phuket has started to collapse after a landslide.

Motorists who are heading from Kathu to the Patong Hill reported the damage at 3:30 P.M. on October 19th. On one side of the road, the land started to slide which has brought down the road side surface and the guard rail.

A road leading to the Patong Hill from Kathu in Phuket is now being temporarily closed after it has started to collapse from a landslide.

The Patong Traffic Police reports the road is being temporarily closed near a curve at a water pump station in Kathu to the Suwan Khiri Wong temple in Patong which is about 500 meters.

The Patong road will be ready to use after temporary repair work which will take seven days and work will be started after the current rain stops.

The Phuket Highway Director Mr. Yutthana Pitak told the Phuket Express, “ The road repair work can be started after the rain stops. The temporary road repair will take about seven days.”

As of Sunday, the road is closed for all vehicles and only available by foot. Patong Municipality Authorities has arranged a shuttle service from Patong City sign – Patong Firefighter Station.

3. Another landslide on a major road in Phuket has blocked a whole lane in Rassada, Mueang Phuket, which has caused traffic chaos.

Traffic is delayed as the whole lane is being blocked by trees and power poles. Traffic Police have assisted on the road.

A part of the Bypass Road which is one of several major roads in Phuket continues to be closed due to a fear of more landslides under an abandoned building on the northbound lane.

The Phuket Governor Narong Woonciew has inspected the Bypass Road area to consider how risky it is to possibly cause more landslides.

A 30-year-old abandoned building on the major Bypass Road in Rassada sub-district, Mueang Phuket is going to be demolished.

It will take about two weeks for the demolishment to be completed.

One of the renters told the Phuket Express the apartment building had started to collapse the day before. There were some significant cracks found at the building during the day time before the building collapsed at night.

A demolishment has been ordered for a collapsed apartment in Samkong, Rassada.

The Rassada Mayor Mr. Nakarin Yosangrat told the Phuket Express, “We have issued a legal document to the owner for the demolishment of the apartment. Normally we will give 30 days.”

5. A 53-year-old female Russian tourist has gone missing from a hotel in the Thalang district.

A missing Russian woman was last seen after going into the sea in Thang and left her clothes and shoes on a beach.

A search was launched by the Sakoo Police, the Phuket Tourist Police, and others since yesterday on both land and in the sea. So far, however, there is still no sign of her.