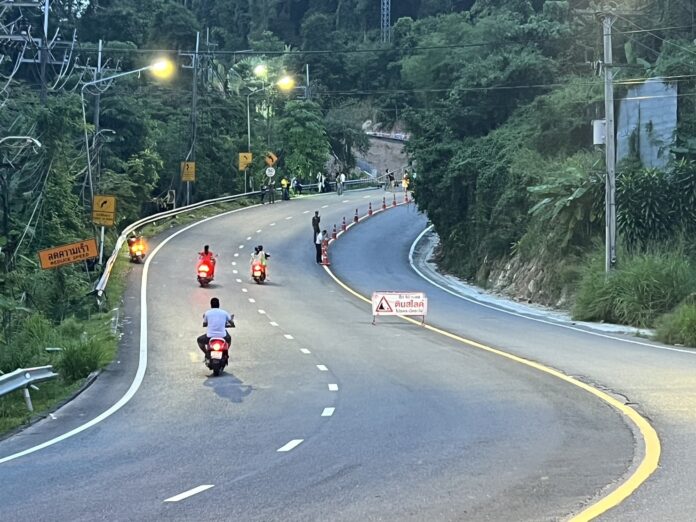 They are in no particular order of importance but roughly in order of publishing. These are from Monday, October 24th, 2022, to Sunday, October 30th, 2022.

The body of a missing Russian woman in Phuket from Thalang was found floating near Patong Beach on Day 6 of a major island wide search.

It was about 40 kilometers from where she was missing.

The Tourism and Sports Minister is going to suggest marine safety improvements for tourists in Phuket to the Thai Prime Minister.

“I will suggest to the Thai Prime Minister to improve marine safety to take care of tourists such as more rescue equipments and more lifeguards,” Mr. Pipat noted.

2. An unidentified foreign man has been rescued after suffering from decompression sickness while he was diving near an island in Chalong.

He told emergency responders that he had just recovered and starting diving again after receiving a heart operation.

3. Motorbikes are now allowed to pass on the partially collapsed Patong Hill Road.

Motorbikes can safely pass through the area. The road is open for motorbikes 24-hours a day.

4. An Israeli man has been arrested at the Phuket International Airport with 55 5.56 mm bullets.

Officers found 55 bullets, 5.56 mm, in his luggage which are used for a rifle after the X-ray process.

5. A Chinese national and his Thai wife were arrested for illegally possessing a number of firearms in their residence following a police search on Friday, October 28th.

A total of 18 firearms were found at the luxurious house of the couple.

6. The last suspect who was wanted for being allegedly involved with the murder of a Canadian man in Phuket was eventually arrested in Hua Hin, Prachuap Khiri Khan province, on Sunday, October 30th, after 13 years of escape.