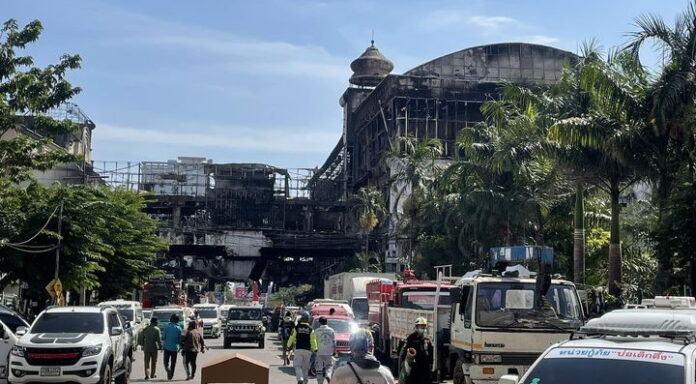 At least 27 Thais died and 112 Thais have been injured in a hotel and casino fire in Poipet, says the official report from the Thailand Public Relations Department.

At least 21 Thais died and 53 were injured in a huge fire at a hotel with a casino inside in Poipet.

The search for survivors and bodies continues.

About 400 people were in the Grand Diamond City Casino and Hotel when the fire broke out according to relevant agencies and officials.

It is still not clear what caused the fire but at least one official, Sek Sokhom, head of the Banteay Meanchey provincial information department, told associated press that it may have been due to an electrical short circuit.

There are fears the building could collapse so rescue teams have had to move slowly, said Thai volunteer rescue organisation The Ruamkatanyu Foundation who is helping with the recovery and rescue operation.
Piyapol Sukkaew, a Thai survivor who was gambling on the casino floor when the fire broke out, told Thai media that he saw a light fixture sparking which started a fire. Piyapol claimed the light was sparking for roughly thirty minutes with nobody attending to it when it became a larger blaze.

The Cambodian Prime Minister, Hun Sen, expressed his sorrow and condolences at the situation and urged relevant authorities to speed up the search and rescue operation while pledging to improve safety and fire standards in Cambodia nationwide.

Poipet is very close to the Thai border and is very popular with Thai gamblers as gambling is illegal in Thailand and strongly enforced. Many of the employees at the casino were also Thai, said relevant officials and rescue workers.

This is a still developing story and more information is consistently released as the search operations continue.