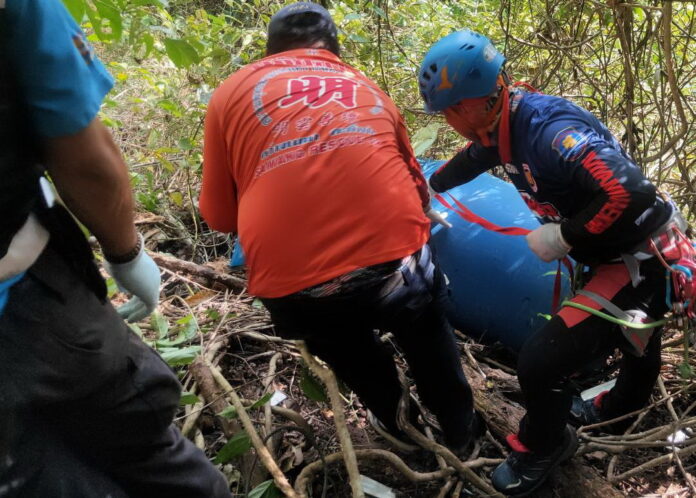 A woman’s body was found inside a trash bin dumped on a hill in the Phang Nga area.

The Ka Pong Police in the Ka Pong district were notified of the body yesterday (December 26th). Police and rescue workers arrived at the scene on the Khao Sok Hill bordering between Phang Nga and Surat Thani.

A plastic bin was found on the hill, inside they found a woman’s body. The body was later identified as Ms. Supattra Yodkaew, 30, from Surat Thani.

Mr. Meksuwan Supanmok, a member of staff at the Kuraburi Highway Station in Phang Nga told the Phuket Express that he was cutting grass and cleaning road signs on the road at the hill. He smelled a foul odor before he saw the bin on the hill.

He was sure that inside the bin there was a dead body because there had been, according to him, many bodies dumped there in the past. He decided to call the police.

At this stage, police believe that the woman was battered to death in a different area before her body was dumped in the trash bin. Police are continuing their investigation to find the suspect and the cause of death.