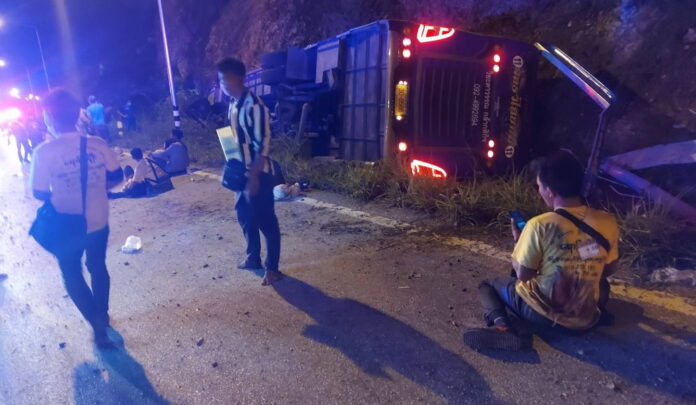 At least three Myanmar workers were pronounced dead at the scene while 44 of them sustained injuries after a bus overturned in Tak, in the west of Thailand.

The Mae Toh Police in the Mueang district was notified of the accident at 9:15 P.M. last night (November 29th) on the Tak – Mae Sot Road. Emergency responders arrived at the scene to find the overturned bus just off the main road.

Rescue workers used a hydraulic cutter to free some of the Myanmar workers who were stuck inside the bus. At least three people were pronounced dead at the scene while 44 sustained various injuries. They were taken to nearby hospitals.

The Tak Police told TPN Media that the bus was carrying 47 Myanmar workers including the driver from Tak heading to Songkhla. The bus overturned on a curve on a steep road where there were many accidents before.

Police believe that the driver might not have been familiar with the road and continued to brake along the way causing what the driver claimed was brake failure. After that, the bus tumbled from the road at high-speed.

The accident is still under investigation as of press time.

The original version of this article appeared on our sister website, The TPN Media, owned by our parent company TPN media.