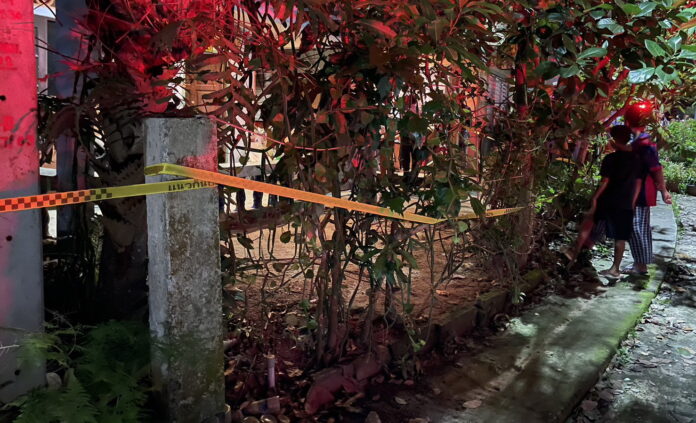 An adult son has been arrested after reportedly slashing his father’s neck with a sharp instrument, murdering him, in Thalang.

The Thalang Police told the Phuket Express that they were notified of the incident at 6:00 P.M. today (November 21st) at a house in Baan Bang Jo, Sri Soonthorn sub-district.

Police and the Phuket Express arrived at the scene to find the body of Mr. Uthai Kammanochart, 51, the father. Mr. Arnon Kammanochart, 26, his son, was calmly waiting for police at the house with an eight-inch long knife covered with blood. Arnon was taken to the Thalang Police Station for further legal action.

Arnon told Thalang police that his father asked him to buy cigarettes and asked Arnon, who is broke, to get money for the purchase from his grandmother at a nearby house. However, his grandmother refused to give money to him. Arnon came back to the house to inform his father of the grandmother’s decision.

Arnon alleges that at this point his father became violent and kicked at Arnon’s face. Arnon then grabbed a kitchen knife nearby in self-defense and struggled with his father physically before slitting his throat, killing him. There were no witnesses to the murder to confirm or deny Arnon’s statement as he and his father lived alone.

Police are continuing their investigation for further legal action and Arnon remains in custody as of press time.