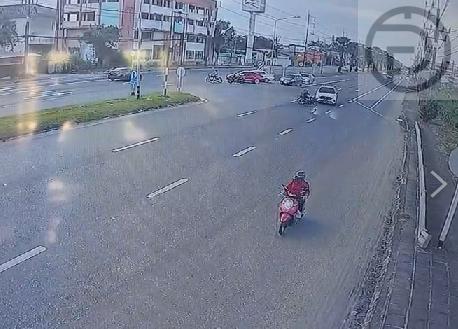 A motorbike rider has sustained serious injuries after he collided with a car in Thalang.

The Thalang Police was notified of the accident yesterday (November 20th) on Thep Kasattri Road in the Sri Soonthorn sub-district.

Emergency responders and The Phuket Express arrived at the scene to find the injured motorbike driver, Mr. Phon Narapong, 54. He had sustained severe injuries. Nearby, law enforcement found the damaged motorbike and car. The car driver, Mrs. Anchaee Chayapiwat, 37, had also sustained moderate injuries. They were both taken to nearby hospital.

CCTV footage shows that the motorbike rider was making a U-turn before crashing with the car which was coming from a straightaway. However, relevant police are continuing their investigation for further potential legal and liability action.