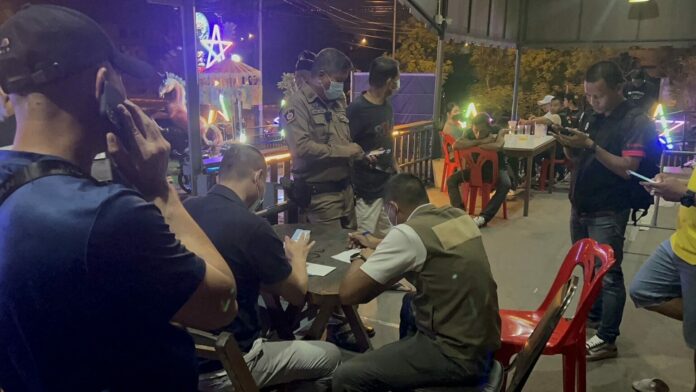 A policeman from Trang’s SWAT was wanted by officials after shooting and killing a bar customer while injuring another two customers during a drunk quarrel with the victim at an entertainment venue in Mueang district, Trang, in the early hours of Tuesday, October 25th.

Officials from the Mueang Trang Police Station and rescue volunteers arrived at the scene around 1:13 AM. after being notified of the shooting incident which involved death and injuries.

Upon arrival, the body of the deceased, who was later identified as Jitakorn Kongchan, was found on the floor. According to the initial examination, the 32-year-old victim was shot nine times in his head, shoulder, and arm.

One of the injured was Jitakorn’s friend named Ekaphot Phetrat, 34, who was shot on his hip and ankle while another injured person was a random bar customer. They were rushed to a local hospital for treatment.

The investigation revealed that Police Sergeant Major Chutipon Nakkaew, who was also known as “Sergeant Bird”, came to the venue with his colleague. According to a waiter, both of them already looked drunk and were presumably drinking from somewhere else before entering the venue.

Sergeant Bird was reportedly kicking a chair and hurt the victim who was sitting at the table next to him. Angry Jitakorn then pushed Sergeant Bird’s hand in rage.

Then, when the victim was walking up to the second floor, the SWAT police officer reportedly took out his gun and threatened Jitakorn from his back before starting shooting immediately. Ekaphot then got off from the table to try to rescue his friend before he got injured.

Sergeant Bird had managed to run off after the incident. About 50 police officials were deployed to hunt down the alleged shooter for legal proceedings.