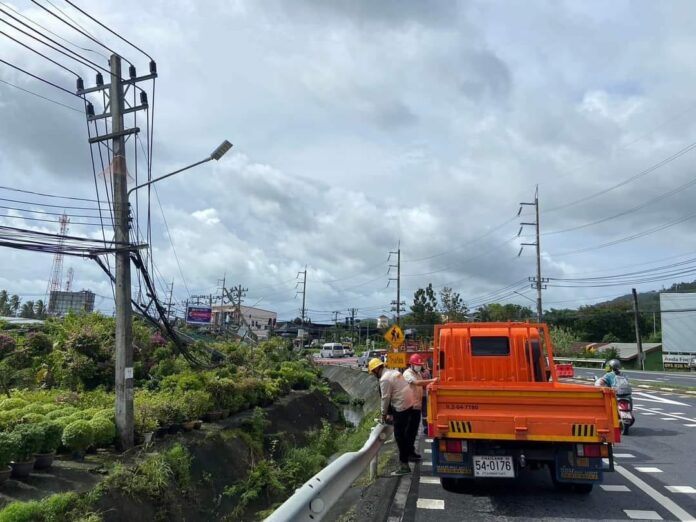 Residents in the Chalong sub-district, Mueang Phuket district have had blackouts for eight hours after five high-voltage power poles have fallen due to bad weather and road users are suffering from traffic jams.

The Chalong Electricity Authority announced the issues this morning (October 20th). Five high-voltage power poles have fallen on the side of the Chao Fa West Road southbound lane opposite the Baan Chalong School near the Chalong Temple since yesterday (October 19th).

Chalong Electricity Authority staffers are fixing the power poles in which electricity has been shut off from 9:00 A.M. to 4:30 P.M. today. They apologize for the inconvenience.

Meanwhile, the Chalong Traffic Police has announced the temporary closure of parts of the Chao Fa West Road from 1:00 P.M. to 5:00 P.M. today while repair work is being done.

The Phuket Express noted this is one of the main detour roads from Chalong – Kata – Karon – Patong.

Road users who want to go into Patong or leave Patong can use the detour way.

A road leading to Patong Hill from Kathu in Phuket is now being temporarily closed after it started to collapse from a landslide. Road users who want to go into Patong or leave Patong can use the detour way.

The Phuket Provincial Police announced the statement last night (October 19th). The announcement stated, “If it is not necessary, please avoid heading to Patong. During this time there are traffic delays because of many motorists on a variety of roads from Patong to Chalong and to Surin Beach on both detour routes.”

The Patong road will be ready to use after temporary repair work which will take seven days and work will be started after the current rain stops.