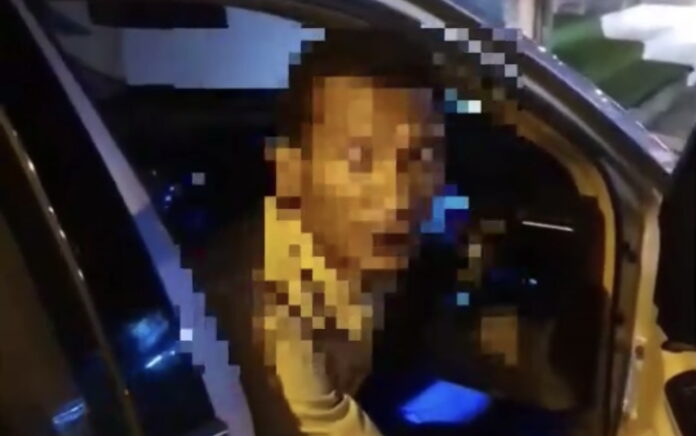 A video clip of a taxi driver arguing with other road users has gone viral in social media.

Mr. Passakorn Sirichochot, who recorded the incident, told the Phuket Express, “Last night (October 10th) I was driving my motorbike home. There was a taxi driver that was honking his horn to chase away other vehicles in front of him.”

“When I arrived at an intersection at a red light in Kathu, the taxi driver honked his horn repeatedly to chase other vehicles away again to make a left turn. However there is a sign saying ‘Left turn please wait for the green light’”.

“The taxi driver lowered his car window before shouting expletives and rude words to other drivers who did not move out of his way. I warned him to please calm down but he cursed me out and then shot me the middle finger and sped away.” Passakorn stated.

The incident is part of multiple incidents in Phuket recently that have hurt the reputation of taxi drivers locally even as law enforcement and island officials pledge to resolve the issues and have held multiple meetings with taxi drivers warning them that they are the “face” of the island to many tourists and visitors and conflicts and complaints must cease about their services.

It is unclear if the taxi driver appearing to suffer road rage will face any repercussions for the incident and Phuket law enforcement did not immediately state if they planned to pursue the issue or even if the man broke any laws or rules, other than bad taste.