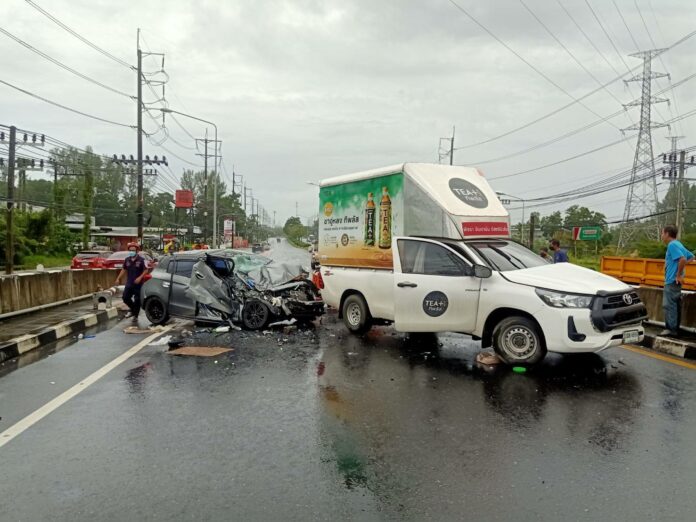 Two people have sustained serious injuries after a multiple vehicle crash near an underpass in Thalang.

Emergency responders were notified of the accident at 3:55 P.M. Friday afternoon (September 30th) on Thep Kasattri Road northbound near the Underpass at the Phuket Airport Intersection in Thalang.

The rescue teams arrived at the scene to find a damaged car and pickup truck on the road. Two injured people were found inside the car. The driver Mr. Apirak Kaewyim, 20, was stuck inside the car. Rescue workers used a hydraulic cutter to free him out. He had sustained severe injuries to his face.

His passenger, Ms. Kingkaew Pramoonchaego, age not released, had also sustained severe injuries. They were both taken to a local hospital.

The driver of the pickup truck was not injured, but declined to speak to media, police, or rescue workers without legal representation and their role in the crash was not clear.

Police are continuing their investigation to find the exact cause of the accident as there were no direct witnesses who claimed to see the entire accident as of press time.