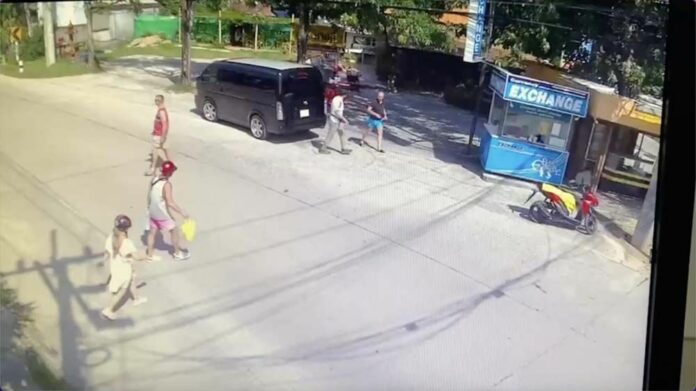 A group of alleged foreign “gangsters” was wanted by Samui Police on Monday, September 26th, after reportedly threatening and extorting a Russian man for crypto currency.

The officials began investigation following complaints of a Russian couple, Evgenii and Ekaterna, who claimed that they were approached and threatened by a group of six Russian, German, and Kazakh nationals while they were at a coffee shop on September 15th.

According to their statements, an alleged German suspect began to talk and make friends with Evgenii before threatening him to transfer three million USD in cryptocurrency, or about 112 million baht. However, Evgenii only had 58,000 USD cryptocurrency, so he, who was reportedly surrounded with the group of alleged gangsters, transferred 50,000 USD to the suspect, equivalent to 1.878 million baht.

After making a transfer, four of them left the scene in a black van while the two others rode away on a red motorcycle. Before they left, the German suspect, who was only known to the victims as Salman Almaty, gave them a phone number, saying that he would contact them for the remaining two million USD.

Evgenii reportedly told the police that he was stalked while he was dining out on the following day and received a call from the Telegram application two days after, asking if he could find the money yet. He then decided to report the incident and seek help from Samui police.

Evgenii claimed he didn’t know why he was targeted and hadn’t had prior dealings with this group.

Superintendent Pongkajorn Sukksang of Samui Police Station had ordered the investigation team to interrogate local witnesses and examine the area for evidence. Initially, the van and the motorcycle as told by the victim were caught and identified via CCTV footage. The police are currently hunting the foreign suspects down for legal proceedings.