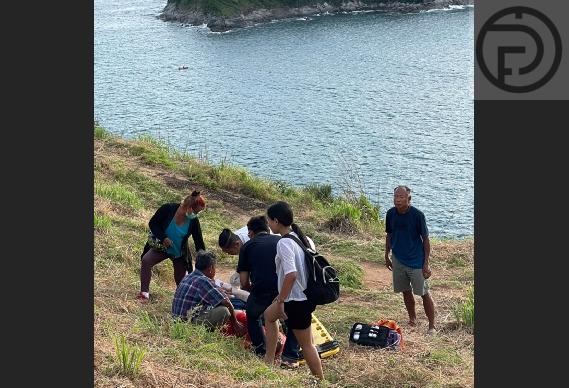 A 78-year-old foreigner has sustained serious injuries after a paragliding fall at a viewpoint in Rawai.

Emergency responders were notified of the incident at the Khao Dang View Point, also known as the Windmill Viewpoint, near Naiharn Beach in the Rawai sub-district yesterday in the late afternoon (September 19th).

The Rawai Municipality rescue team told local media that there was a strong wind when the 78-year-old foreigner fell with his paragliding equipment. He had broken his right arm and injured his right leg and hip. He was taken to a nearby hospital for urgent medical assistance.

The injured foreigners name and nationality were not released to the press by rescue services. It was also not clear if he was an ex-pat or a tourist.

TPN notes that there are warning signs for not allowing paragliding in this area as there were similar incidents in the past.

Previously, staffers from the Rawai Municipality warned tourists and locals paragliding against doing so due to regulations and rules prohibiting such activities in this area, but the municipality stated to the press that many people refused to listen. As a result, there are individuals and groups still doing paragliding and other similar flying activities in this area.

It’s unclear if a company or business was associated with the paragliding or if the man was undertaking the activity alone or with friends.

The Phuket Express is your number one source for Real, Unbiased, Impactful, and In the moment breaking news based in Phuket, Thailand. Our news focuses on the latest news in and around Phuket, Thailand and Southeast Asia. We also own and operate TPNnational.com and ThePattayanews.com for English language news.
Contact us: Patt[email protected]