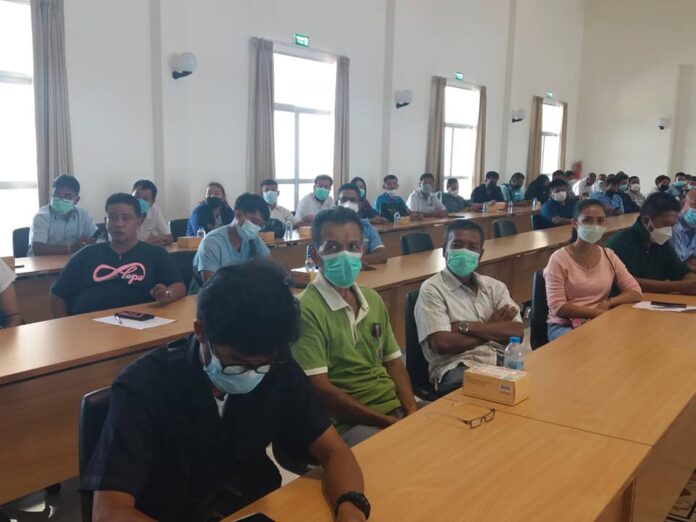 Taxi drivers in Phuket are being asked by top Phuket officials to provide quality services for customers and tourists.

Drivers of two minibus services were summoned to the Phuket Police Station on Sunday, September 4th, following a quarrel over picking up foreign customers near the Rassada Pier in Mueang district on Friday, September 2nd. Tourist police are also looking for the four female tourists seen in the video to get their side of the story and create mutual understandings of what exactly happened.

Tourist Police gave a bouquet to tourists on Samui Island who were on a minibus in Phuket during a quarrel over picking up foreign customers.

Now, for our update:

A major meeting was held yesterday (September 9th) and was led by the Phuket Vice Governor Arnuparp Rodkwan Yodrabam. Joining him were multiple taxi drivers and supervisors of various taxi stands and organizations.

Mr. Arnuparp told The Phuket Express, “We have received many complaints about taxi services and have seen many issues on social media. These have affected Phuket’s image as one of the world’s most famous tourism cities.”

“We want to make sure that taxi drivers in Phuket understand the laws and rules for providing quality services including those taxi drivers who are providing service via online and mobile applications.” Arnuparp concluded.

TPN notes issues with taxi drivers from professionalism to price gouging have haunted Phuket since well before Covid-19 with many different groups trying to repair the problem with little to no success.