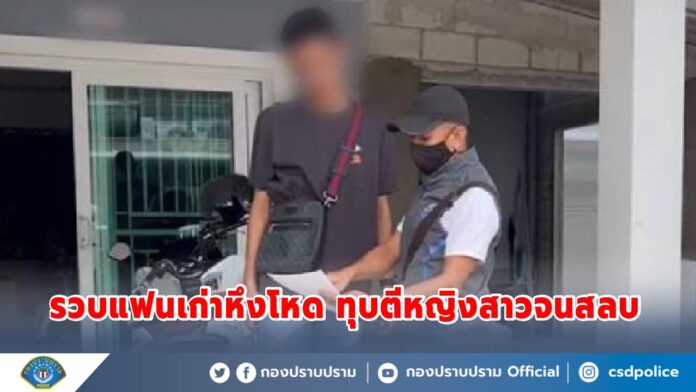 The Crime Suppression Division police have arrested a 26-year-old man in Phuket for allegedly beating his ex-girlfriend until she was unconscious and then abducting her and keeping her locked in his home.

The Crime Suppression Division reports that yesterday (September 7th) they have arrested Mr. Worawat, 26, at a house in Chalong. His last name was not provided. He is facing charges of bodily assault causing physical and mental damage, breaking into other accommodation at night with a weapon, and detaining others against their will.

Worawat is the victim’s ex-boyfriend. The victims name has been withheld as is our editorial policy in these particular criminal cases. In May of this year, Worawut met with the victim to “talk” after breaking up.

Worawut lost his temper during the conversation with his ex and hit the victim until she was unconscious before forcefully taking her to his house. He allegedly threatened to keep her against her will at his home.

However, the victim managed to use her phone and sent text messages to friends and family for help who successfully rescued her from Worawut’s home, who then fled. She later filed a report to Chalong police until the suspect was located and arrested.

It was unknown if Worawut had a lawyer and he did not release a statement to the press. His plea had also not been entered as of press time.