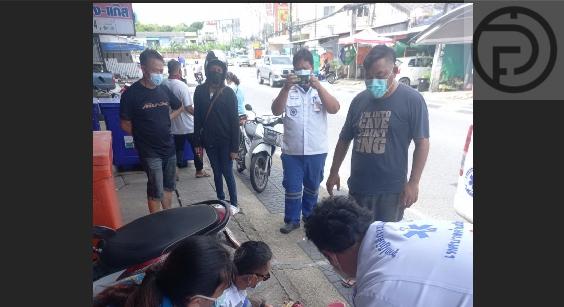 A 31-year-old man has sustained serious injuries after he was allegedly slashed with a knife by his friend on a road in Wichit in broad daylight.

The Wichit Police were notified of the incident at 3:00 P.M. yesterday (August 25th) on the side of the Mudong Canal – Borae Road near the entrance of Soi Thung Jaroen.

Emergency responders arrived at the scene to find the man who was later identified as Mr. Kittisak Malipan, 31. He was bleeding heavily from a severe wound on his leg but still conscious. He was rushed to a local hospital.

Local residents told police Mr. Kittisak who was injured was asking for some sort of assistance from his friend but it turned into a verbal and then physical argument. The exact nature of the argument, however, was unclear.

Police are continuing their investigation for further legal action.