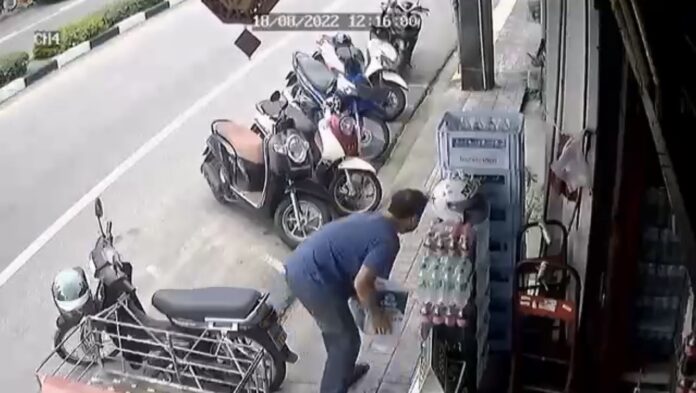 A thief was caught on CCTV camera stealing a box of beer at a grocery store in Phuket Town.

Mr. Damrong Damthong, 45, filed a report to the Phuket City Police yesterday (August 18th) with CCTV footage evidence. He told police that a male suspect who was on a motorbike stopped in front of his grocery in broad daylight just after noon on Phuket road in Talad Yai.

The suspect stole a box of beer in front of the grocery before speeding away on his motorbike. Mr. Damrong was inside the grocery. There were 12 bottles of beer inside the box which cost 638 baht.

Mr. Damrong told The Phuket Express, “It is just a box of beer which does not cost a lot. If you were caught it is not worth to do. This suspect was not afraid even though there is CCTV camera. It’s the principle of this person being brazen enough to steal ”