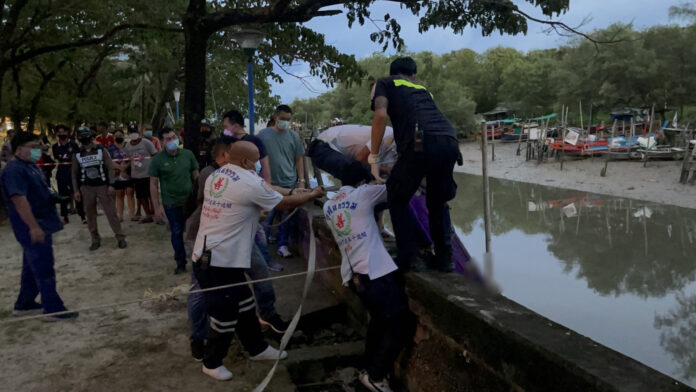 A woman was found dead in a canal in Phuket Town near a public park in Phuket town.

The Phuket City Police were notified from a local resident at 5:00 PM yesterday (August 16th) that they saw a body floating in the Bang Yai Canal near Saphan Hin Public Park on Phuket Road in the Talad Yai sub-district, Mueang Phuket.

Rescue workers and police arrived at the scene to find the body drifting in the canal face down. The water tide was low at the time the body was found. A face mask and a pair of shoes were found on the side of the canal. No sign of a struggling was found on her body. Police said the woman died at least six hours before her body was recovered.

The woman told police her mother in law suffered from depression. She had not come back home since yesterday (August 15th).

Police are investigating to see if Ms. Parichart accidentally fell down into the canal or jumped into the canal. Her body was taken to Vachira Phuket Hospital in Phuket Town.