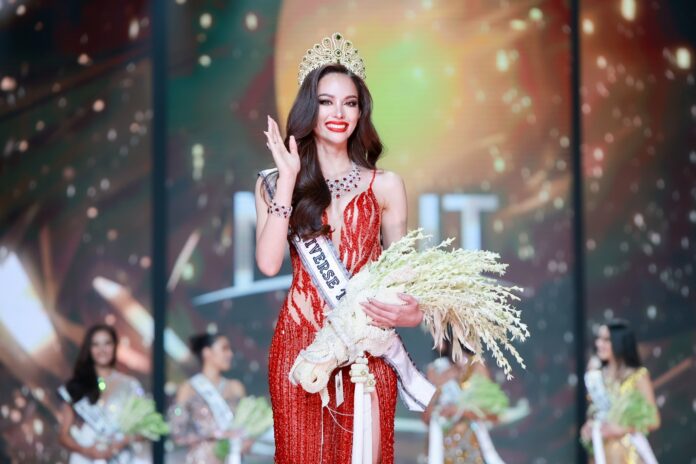 Anna, who was also formally known as an actress for Channel 8, will also represent Thailand at the Miss Universe 2022 in San José, Costa Rica.

The Miss Thailand Universe show began with 29 pageants showing off their beauties on the stage. Only five beauties were selected for the final round.

Anna won the crown after the question section, followed by Nicolene Limsnukan as the first runner-up, Kanyalak Nookaew as the second runner-up, Suchata Chuangsri as the third runner-up, and Renita Veronica Pagano as the fourth runner-up.

In the last round of the question section, Anna was asked if she only has one opportunity to donate to a better community, which would she choose to support between Public Health, Education, or the Environment, and why.

Anna chose ‘Education’, reasoning that education is fundamental to all sources. She said: “Whether it’s the environment, public health, or anything else, they all start with education. Therefore, I’d like all departments involved to pay more attention to education. Because I believe that education will develop the country and the knowledge of every child. Thank you.”

Anna, despite the first name, is a hundred percent Thai and not a stranger to a difficult upbringing. Both her parents were garbage collectors in Bangkok and Anna was bullied by classmates who called her “Miss Garbage”.

What a turnaround she has had.