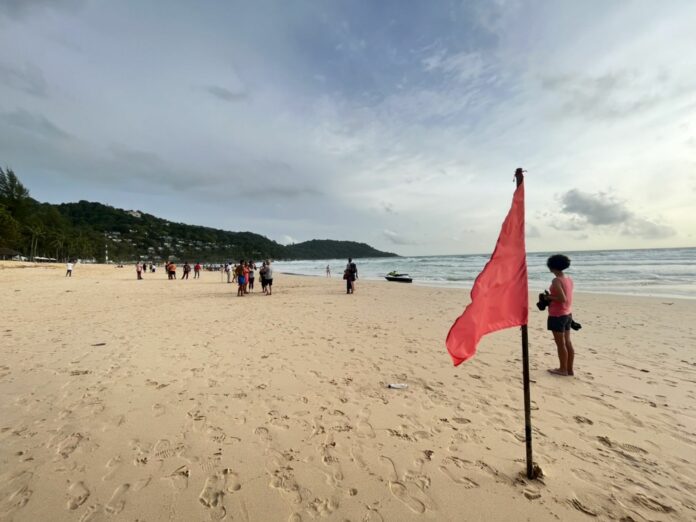 They are in no particular order of importance but roughly in order of publishing. These are from Monday, July 11th, 2022, to Sunday, July 17th, 2022.

This followed an announcement from the Thai Meteorological Department, reporting that strong winds and waves are predicted in the Andaman Sea due to a strong southwest monsoon until July 14th, 2022.

2. Two people have been pronounced dead after a male British tourist who was on his honeymoon drowned as well as a Thai man who was trying to help save the British tourist’s life at Kata Beach in a red flag area on July 14th.

Emergency teams arrived at the beach to find the male British tourist, 34 (MR.ALI MOHAMMED MIAN) and the male Thai tourist, 55 (Dr. Surasit Pongaohapan). Both men had been already pulled from the water by lifeguards. They were rushed to a local hospital where they both were tragically pronounced dead.

Surasit Pongaohapan, a Thai doctor who was on holiday to Kata beach, was honored for his dedication after being pronounced dead while rushing to help save a British tourist who was drowning under strong and large waves in Phuket on Thursday, July 14th.

His will also donate his body for cadaver studies to the Faculty of Medicine, Chiang Mai University.

Two foreign tourists were rescued after battling with waves at Kata Beach, the same beach and the same day that two other tourists passed away.

In both cases, the tourists went swimming despite many red flags, no swimming signs, and lifeguards warning people not to enter the water.

The Phuket Governor Narong Woonciew visited lifeguards at Patong Beach to ensure safety measures were being followed due to strong waves, wind, and bad weather.

Governor Narong told The Phuket Express, “I came here to give encouragement to the lifeguards as this is monsoon season with strong waves. We want tourists to visit beaches in Phuket with happiness and safety.”

2. A Switzerland captain and his daughter have been rescued after his yacht broke down near the Naka Island off Phuket during a period of strong wind and waves.

However, the captain told the Navy he didn’t want to be pulled back to the shore and preferred to pay to fix his boat and leave on his own power.

Most bookings are on July 13th to the July 15th when most hotels are near full. Some hotel booking rates are up to 80 percent full.

4. Many areas in Phuket were seen flooded on July 16th, due to constant heavy rain.

The flood occurred in several areas in the Mueng district, particularly at the parking lot of Phuket Radio Thailand and the entrance of Phuket Rajabhat University.

Meanwhile the Phuket City Municipality has, according to them, solved three repetitious flood areas in Phuket City.

Mr. Saroj Angkanapilart told the Phuket Express, “The three main flood areas in Phuket City were at the Srisutas – Amphur intersection heading to Koh Sirey, the Samkong area and Sakdidet.

5. A taxi driver in Phuket found a wallet in his taxi before returning it to a foreign owner.

The foreign tourist was happy to receive his wallet. He checked his wallet and said everything was still intact. He said thank you to the taxi driver and the Phuket Tourism police for the good deed.