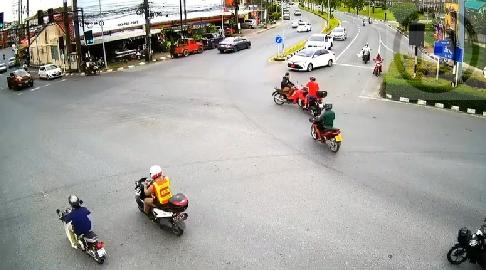 A motorbike rider has sustained severe injuries after another motorbike rider ran through a red light and crashed into the first rider in front of a traffic police officer at an intersection in Kathu today.

Emergency responders were notified of the accident at 11:10 A.M. today (July 9th) at the Si Kor Intersection in the Kathu district. They arrived at the scene to find an unidentified Thai male lying on the ground near his motorbike, aged around 45. He had sustained serious injuries. Nearby, emergency teams found a second heavily damaged motorbike at the intersection. The Kathu Traffic Police were at the intersection.

CCTV footage at the intersection shows one of the motorbikes ran through a red light before colliding with the other motorbike. The motorbike rider that ran through the red light was not injured and was not immediately identified by the Kathu traffic police.

The Kathu Police are continuing their investigation for further legal action.