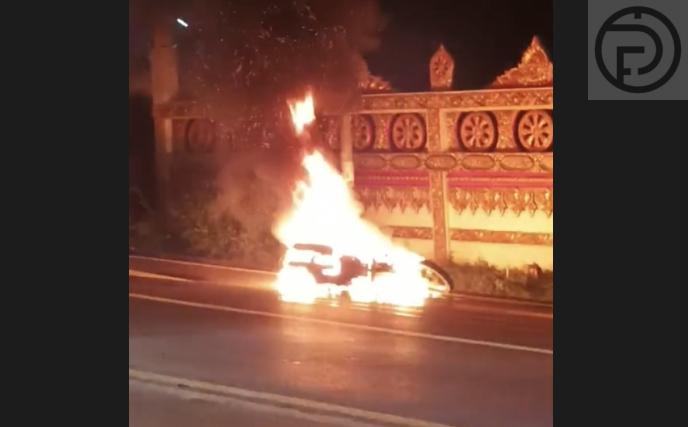 A driver has survived after his motorbike caught fire while he was driving down Patong Hill.

The Patong Police was notified of the incident last night (June 24th) near the Suwan Khiri Wong Temple on Phra Baramee Road in Patong.

Police and firefighters from the Department of Disaster Prevention and Mitigation from the Patong Municipality with a fire engine arrived at the scene to find the motorbike was heavily ablaze. It took about 5 minutes to put out and control the fire. The motorbike was totally destroyed.

The driver, Mr. Niphon Mengeaid, 54, a food seller in Patong who was not injured told The Phuket Express, “I was driving down Patong hill when other motorbike drivers behind me shouted out that my motorbike caught fire from behind. I stopped the motorbike and jumped away from the flames before locals called firefighters. ”

At this stage, it is believed that the motorbike caught fire from a battery which was just fully charged was put under the motorbike seat. The cost of damages is estimated at about 30,000 baht.