The Center for Covid-19 Situation Administration (CCSA) today, May 20th, has announced color-rezoning in many provinces and the reopening of entertainment venues in provinces/areas in the Green Zones and the Blue tourist pilot Zones, including Bangkok, Phuket, and Chonburi, from June 1st onwards.

Color zones in Thailand are used to assign and delegate Covid-19 restrictions and measures by province, notes TPN media.

Regarding the rezoning, provinces in the yellow zone or the high surveillance zone are now reduced from 65 to 46 provinces. 14 of them are now in the Green Zone or the surveillance zone, namely Chainat, Trat, Nakhon Panom, Nan, Buriram, Phichit, Ang Thong, Maha Sarakam, Yasothorn, Lampang, Surat Thani, Surin, Udon Thani, and Amnat Charoen. 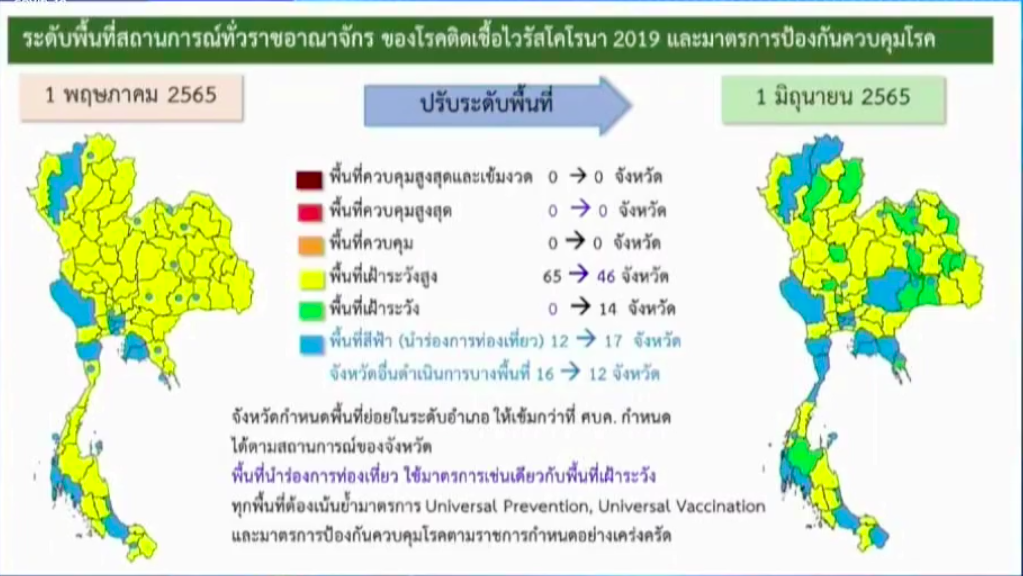 After the rezoning, the CCSA announced the legal reopening of entertainment venues from June 1st, including bars, pubs, soapie massage parlors, karaoke lounges, and similar establishments, in all provinces/areas in the Green Zones and the Blue Zones, as listed above. Yellow zones will keep these venues legally closed, for now.

TPN notes these venues have been operating as converted “restaurants” since December 2021 with various rules and restrictions.

From June 1st onwards, such establishments are allowed to sell and serve alcoholic beverages as well as operate their businesses no later than midnight. Glasses must not be shared and both employees and customers must prevent close contact and must be wearing facial masks throughout the service.

Employees, musicians, singers, and related personnel must be fully vaccinated including the booster dose. They must conduct an ATK test every 7 days or when they are having suspicious symptoms. Employers must perform a risk assessment of their employees every day via Thai Save Thai (TST) or other assessment applications.

Customers must present a vaccination document that indicates that they are fully vaccinated, before using the services. Both employees and customers must follow preventive measures under Universal Prevention (UP) at all times.

TPN notes that governors of provinces and communicable disease committees must agree to the measures and have the ability to strengthen measures if they wish.

Despite the measures relaxation, the government announced the Emergency Decree extension for another two months, or until July 31st, awaiting final confirmation from the Thai Cabinet likely next week. The CCSA reported that the extension will continue until the redefinition of Covid-19 as an endemic disease is implemented in the Kingdom.

In regards to this designation of Covid-19 as endemic, Public Health Minister Anutin Charnvirakul said the review of this was ongoing but there was “no guarantee” it would be on or by July 1st, as some media had previously stated.

Thailand Pass will be streamlined, but not yet removed, for foreign nationals from June 1st and taken over by the Department of Disease Control. According to the briefing, the application and approval process will be “faster than ever” by providing a QR code immediately after applying to bring to the airport. Thai nationals will, after June 1st, no longer have to use Thailand Pass. The insurance requirement of at least 10,000 USD that covers Covid-19 will remain.

Unvaccinated or not fully vaccinated tourists will now be able to take a Covid-19 test before or after international arrival and no longer face quarantine.

TPN media notes this is a developing story and changes may be made to this article with no notice.