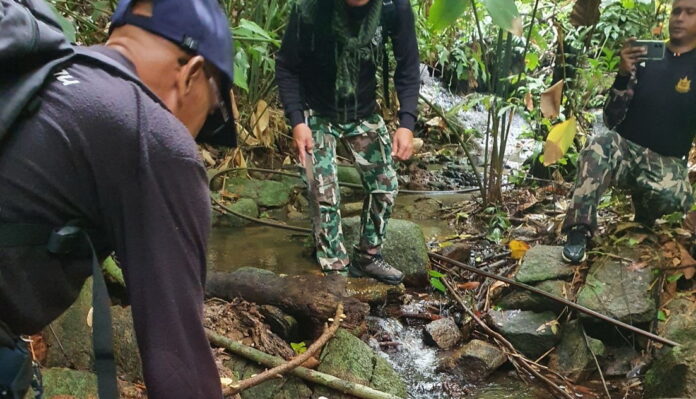 A missing 76-year-old German tourist was found alive but weak in a shallow canal in the Sirinat National Park this morning by a team of rescue workers (May 16th) in the Thalang district.

A 76-year-old German tourist with medical issues involving memory loss has now been missing on Phuket for over five days, since May 9th. The search has expanded to Sirinat national park.

After an eight-day search, Ms. Barbara Lange, 76, from Germany, was found alive by national park officers lying in a small shallow freshwater canel in the Sirinat National Park area at 11:30 A.M.. She was cold, shaken, and weak. She was rushed to a local hospital for a medical evaluation but is expected to recover.

Ms. Lange suffers from memory loss issues and is unlikely to be able to recall her ordeal but her family and friends are reportedly extremely grateful to teams of dozens of volunteers who scoured the Sirinat National Park area for her. She had been spotted walking down a road in the vicinity of the park last week, leading to officials to zoom in on the park as a search location.

The search for Ms. Lange followed her going for a walk and leaving her hotel room on May 9th near the Mai Khao area. She had arrived in Phuket for a holiday with her family on May 5th and reportedly loved to go for walks, despite her memory loss issues.

Prior to this most recent incident, in fact, she had gone missing for a short period of time on a different walk, but had been quickly found by tourist police. It was the second incident, however, that grabbed national headlines in Thailand.

TPN media will provide any further updates to this as they are made available.