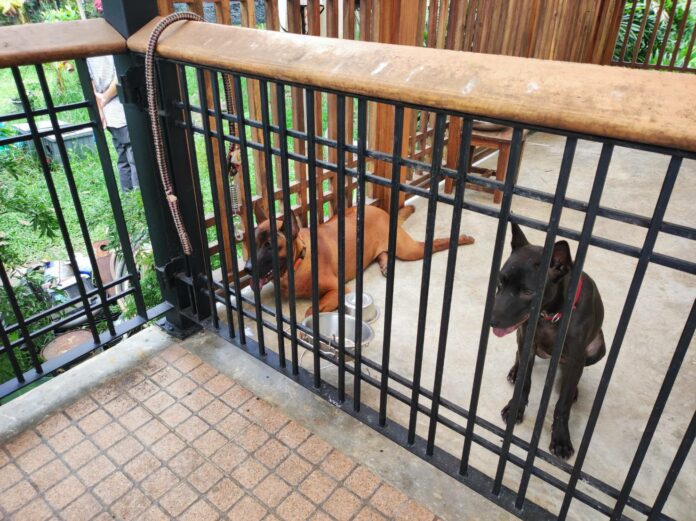 A woman has been pronounced dead after being attacked by her brother’s dogs at a house in the Thalang district this morning (May 10th).

Emergency responders were notified of the incident at 10:00 A.M. at a house in Baan Bang Pae in the Paklok sub-district.

They arrived at the house to find the body of the woman who was later identified as Ms. Sarinrat Laongpanitchakun, 38, bleeding heavily on a balcony in front of the house. About three severe wounds were found on her neck on the left side which were likely to be from fangs. Blood was found on the two dogs’ hair and mouths.

Ms. Supakwee Tortip, 38, told the Phuket Express, “She was my colleague. I called her at 7:00 A.M. but had no answer. I came to her house where she lived with her family. At that time she was alone, her other family members were in Bangkok. I entered her home after I had no response from knocking on the door and calling for her as I was concerned for her health and she had never gone this long without talking to me. I was shocked when I discovered she was dead near a dog cage.”

“The Two Thai dogs are about one-year-old and belong to her brother. Normally. the dogs were not fierce. Ms. Sarinrat had sustained Myasthenia Gravis (muscle weakness) but she can walk. She might have fallen onto one of the dogs while she was feeding it in the cage. The dog was frightened before attacking her.” Supakwee stated.

The breed of the dogs or their fate was not immediately made clear by Supakwee. Sarinrat’s brother was reportedly rushing to Phuket as of this afternoon from Bangkok.